Get the latest posts via RSS!

Our first ever fan art for the Dinoian transformation in Chapter 6!

Here’s a snippet from the chapter description about them:

What should have been an easy ride across the desert turns out to be much more than you bargained for.  The convoy rides on specialized creatures that are genetically engineered to withstand the tough conditions of the desert.  These dinoians could best be described as a distant anthropomorphic cousin of a velociraptor, or perhaps some sort of wingless riding dragon.  One of them, Hanako, is planning her prison break, and you haplessly stumble into her plans.

Soon she’s stealing your identity.  She forces you to wear her old leather bindings, transforming you into a dinoian that looks just like she used to.  She had unintentionally acquired the reputation of convoy slut, and now that you have her identity, she intends to make sure you live up to her old behaviors so as to not be suspicious.  Every time you disobey her, she increases the size of your cleavage, making you hornier as you’re forced to expose your nearly-naked body to the world as she rides you.  To make matters worse, thanks to your monstrously large dinoian vagina, you won’t derive any joy from copulating with humans — so your body will work against you to force yourself to mate with your fellow beasts.  But they’re in a similar predicament, former humans trapped in lusty bodies that have no choice but to serve their riders and their base desires.

Try as you might, dinoians are forbidden from speaking thanks to their vocal cords which can only make animalistic noises.  Though you desperately want to explain your situation, no one can understand you.  Even removing the bindings themselves is impossible as they self-replicate to ensure you can never be freed.  Stick around long enough, you’ll start to enjoy serving your rider.  You may even begin to enjoy being tied up with your wrists bound, further restricting your opportunities for escaping this life.

Will you succumb to your dinoian need to be filled up and lay clutch after clutch of eggs?  Or will you find a way to escape your fate and complete the mission?

Also, next game update should be out in the coming week~

You can now easily browse and install mods — all from right from inside the game!

With the new r34 build, active subscribers can use the Control Panel inside the Debug Rooms and select browse to get an interface like this: 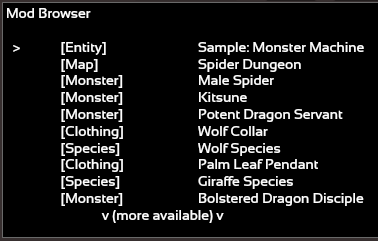 Then simply select mods you are interested in and install them. 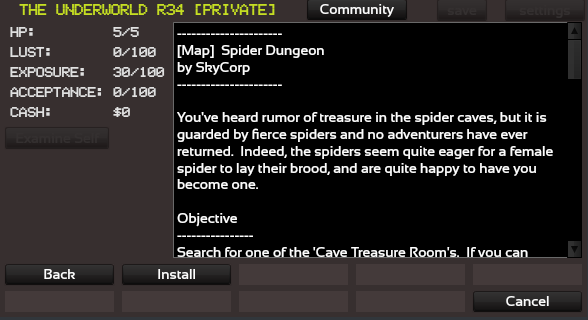 The interface works on both the regular SWF version, as well as the mobile version — making it infinitely easier to play mods on Android phones (no more copy/paste!).

There is also a mod web portal to browse, edit, and submit new mods outside of the game.

Made some changes to the Play In Browser page so hopefully it should work a little better in Chrome (until Google removes flash support entirely, anyway).

r33.02 has been released with fixes on Wyvern code:

After wearing a collar in the debug rooms labeled “Female Breeder Wyvern #562,” the researcher will find themselves shifting.

Their toes will become claws, while their skin develops a mixture of scales, feathers, and fur. A thick tail will grow, swishing around invitingly and drawing attention to their newly plump butts from any nearby potential mates. If they weren’t already female, they’ll become so with two rows of massive breasts and a vagina large enough to mate with a male wyvern.

Despite the new breeder instincts driving the hapless researcher into a lustful frenzy, they’ll find themselves unable to gain any self-pleasure with those useless wings. Their body is designed to breed, forcing them to seek out the company of a male who will fill them up. An extremely fertile womb will only need a few drops of their mate’s cum to begin producing a clutch of eggs. Belly rapidly expanding, they’ll soon discover wyverns have a long incubation time as they’re left lumbering about with an impossibly large brood. Eventually, even movement will become difficult as they struggle to carry a clutch so big their past exploits as a breeder are obvious to everyone. Midway through the pregnancy, they’ll find their breasts become milky… although with no hands to milk themselves they’ll need to rely on a milking machine to do it for them.

Meanwhile, they’ll find communication becoming more difficult as their nose becomes ridged and they develop a snout — try as they might to vocalize their needs, the only thing that comes out are squawks. Even Arya cannot understand them to help remove their transformative collar, leading them to be permanently stuck as a needy breeder.

Fortunately, their body is able to express their desires non-verbally: their slit begins to emit the alluring smell of a lust-crazed breeder, ensuring the shy researcher will get exactly the kind of attention she secretly craves. Taken again and again, she’ll love spending the rest of her life as an incubator for her mate, laying clutch after clutch of eggs like the good breeder slut she has become.

One new concept I am experimenting with on the Wyvern TF is an ‘instinct’ system.  The instinct narration will actively tease the player, encouraging them to engage in breeding.  I think it came out pretty sexy (especially the later teases), but it does have a very different tone than the usual narration text.  After you’ve tried it, post your thoughts in the comments or discord.

Some notes on playing the Wyverness:

Thanks to Pyru for doing some proofreading on an earlier iteration of the Wyvern TF.  Any errors are my own.

Eventually, I would like to write a Male Wyvern Mate to go along with this TF, along with a little story and game area.  It doesn’t fit in with the story chapters, so maybe it’ll end up being the first DLC/side chapter later on.  But getting Chapter 7 done will probably come before that.

Have fun being a wyvern, and enjoy what is now the fourth egg pregnancy system in the game. 😉