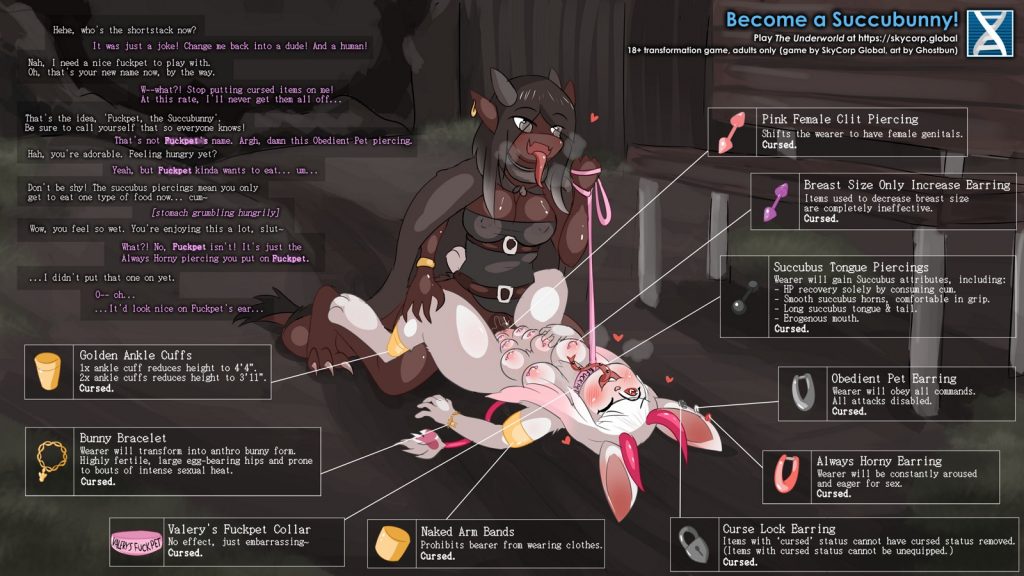 She’d be damned if she let some larger dragon claim her as some sexpet. If anything, she was the one who should have a pet! Especially since her finances were being quickly drained by frequent trips to the brothel to satiate her drakeling needs. She wanted someone she could dominate like she used to when she was a human… that meant finding someone even smaller, even hornier than a drakeling.

But… that someone didn’t exist. So Valery set off on changing someone to meet her needs. Fortunately, you stumbled into her right after she had just acquired all those lovely transformative items.

You probably shouldn’t have teased her about her height. And you definitely shouldn’t have stolen that jewelry and tried it on. Thanks to that, she chose to make you into her new pet. Determined to make you even sluttier than she was, Valery gave you the fertile, in-heat body of a female anthro bunny.  Further degrading you, she turned you into a succubunny — now you could only feed on cum. Eventually, you just lost count of the number of cursed items she kept tossing onto you. All you knew is that little shortstack kept changing you until she was now the relatively bigger and stronger one. You fell into her control quickly, almost eagerly, and now all you wanted was to serve her and her wonderful cock. Thanks to her changes to make you a helpless, obedient pet, you can’t even fight off enemies in The Underworld anymore… but that’s fine since you’re both enjoying your new lifelong role as Valery’s Fuckpet! 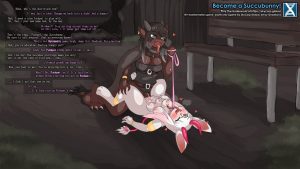 Art by the lovely Ghostbun.

This new DLC content is available exclusively to active subscribers at no additional charge beyond your existing subscription.  You can get it in the usual place (researcher intranet).  As with the Hydra, it will not be released later to demo or legacy players.