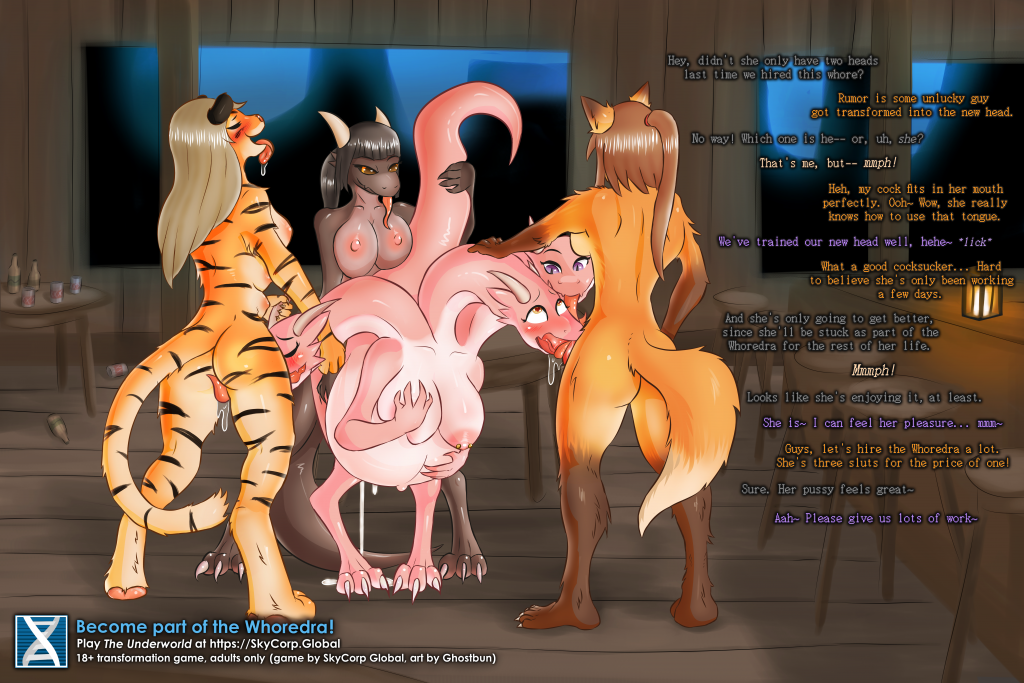 Most of the town doesn’t really understand there’s three personalities inside the hydra, instead viewing you as just one needy, multiheaded slut.  It doesn’t help that you look and sound the same as the other two heads, and can’t even remember your real name from before Anica changed you.  You have a new, simpler, sexier name now, though most of your customers don’t bother to learn it.

The Whoredra also has long-standing relationships with some of the townspeople, so don’t be surprised when you stumble into the middle of their longstanding love triangle with Nova, the resident (kind of wannabe) alpha wolf who has fallen in love with the Whoredra.  Will you settle down with the shemale wolf, or push her away?

Your two new heads, Emerald and Violet, are affectionate partners.  They’ll shower you with love most of the time, but sometimes you’ll fight amongst yourselves.  It’s up to you to keep everyone happy by fulfilling their desires so you can stay in control… most of the time.  Learn their interests and keep them fulfilled to stay on top.  Or they’ll be happy to wrest control from you and do as they please.  Sometimes it’s a minor inconvenience, and sometimes results in permanent effects, such as in the case of Violet’s love for piercings and tattoos.  It’s her body too, and if you don’t keep her happy, she’ll decorate it as she sees fit.

The hydra is initially in a draconic form, something Emerald loves thanks to the propensity to end up with a huge egg-filled belly.  However, with your arrival, the hydra might end up in any number of multiheaded forms depending on what transformations you embark on.  You might simply remain draconic, or switch to a three headed foxgirl or even become a three headed, limbless sluggirl — the hydra heads will travel with you regardless of form you take.

Will you give into a life of whoring?  Or fight the lusty needs of the two other heads?  Challenge your new pimp and deliver sweet revenge to her, or submit to your new life and become the town whore, or even do both!  With 26,000+ new words, a host of new characters to meet and several new gameplay systems, the Hydra DLC update is now available to all active subscribers. 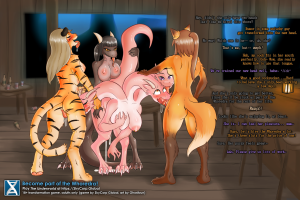 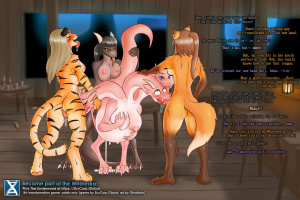 The hydra DLC content is available exclusively to active subscribers at no additional charge beyond your existing subscription.  You can get it in the usual place (researcher intranet).  As with the Wyvern Male, it will not be released later to demo or legacy players.

However, there are some general purpose changes for everyone to enjoy:

Here are some note on the hydra content specifically:

Whew!  That should about wrap everything up for The Whoredra.  Due to her unique gameplay, it was a much larger amount of work to bring her to life than I originally planned.  But given how heavily hydra TF was voted for in the poll, I really wanted to make it special.  I’ve personally enjoyed playing as her during the past months of development, writing, and testing.  I very much hope you enjoy playing as her, too!