Here’s some updates on some behind the scenes work I’ve been doing on the project:

I know there’s been a lot of (justified) concern about Flash games no longer being playable at the end of the year, thanks to browsers dropping support for them.  Even well known web games like Farmville are shutting down entirely.  For us, the most important thing to note is the end of Flash is not the end of The Underworld.  This is because two reasons:

1)  The Flash version of the game client will still run, just not in browsers. On desktop you will still be able to play the game’s SWF via the standalone Flash player projector — slightly inconvenient, but still definitely playable.  And the Android APK will continue to work as normal.

2)  I am in the process of doing a full rewrite of the game.  This is a massive undertaking, but already there’s been tremendous progress.

Currently, the first five chapters are all fully playable in the new engine, using a test UI.  If you’ve been following the backer channel on Discord, you’ve probably already seen a bunch of early dev screenshots leading up to this latest one: 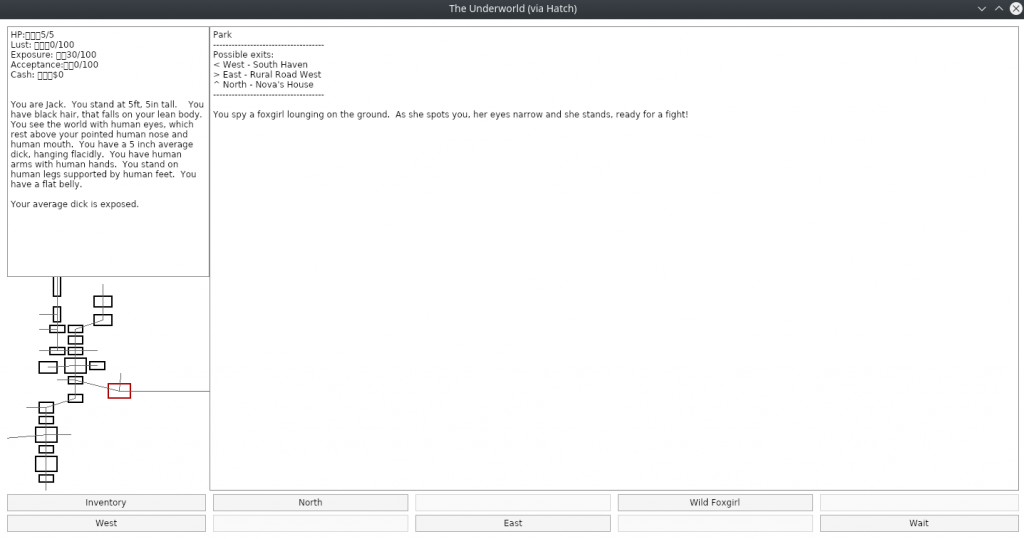 Currently, most all the core gameplay features like player state, maps, items, enemies, fights, transformations, acceptance system, visibility, pathfinding, etc are all in.  The remaining stuff is the additional chapters, DLCs, mod support, getting a proper front-end, save/load, and so on.  So there’s still a lot of work to do, but it’s getting there (no ETA yet).

For whenever the initial release is, I am planning for the first release to support HTML5 / web browser only.  If I do it right, you’ll be able to play the HTML5 version on Android/iOS web browsers, too.  But once the HTML5 version is working, I’m planning to get a version made for Windows EXE & Android APK.

The whole codebase is moving to C# now, which has a lot fewer idiosyncrasies than ActionScript and has already helped me find and fix a number of old bugs in the source code.  Flash has always had a lot of strange unfixable bugs based on which version of Flash player you’re using, and so I’m looking forward to those no longer being something to worry about.

It’s been a while since I got to work on any content, so I’m planning on taking a break from engine rewrites and make some new (small) content.  I’m leaning towards mods and stories, since engine-independent content I wouldn’t have to immediately re-port from the old engine to the new engine afterwards.

You can help me decide how to spend the break in the current poll.  It’ll be the same total amount of time spent regardless of medium, so that means depending on which option is chosen, the amount of new content will vary with complexity.  Example:  For something like clothing, I could make a bunch of small clothing mods.  Whereas something like a complex scripted monster, would probably just be one enemy.  Alternatively, I could just write a TF fiction or something like that, which would be the most amount of content by wordcount, but be non-interactive.

Active backers can vote in the Researcher Intranet as usual for polls.

In terms of specifics, I’m still thinking over what I want to make.  Feel free to share your ideas in the comments and on our Discord server.

(If you’re using BMT, nothing in this section should affect you)

Patreon is requiring all projects to support multiple currency options as of today, Oct 5th.

Since this happened after the existing charge cycle for October, it shouldn’t affect anyone until next month’s charges on Nov 1 (and only if you opt in).

Please note that Patreon doesn’t charge the exact same for international currencies as the USD equivalent, as there’s an international transaction fee included in the cost.  It may be slightly more or less than what your bank would charge for the same service, so you may want to compare closely and see what’s the best deal for you.  (Based on my own personal credit card’s 3.5% international transaction fee, it looks to be about a $0.14 markup for their conversion service)

Unfortunately, supporting this change necessitated a complete and total rewrite of the pledging backend for our website.  It was fairly time consuming to do, but it’s now finished in time for the upcoming conversion.  It’s already up and running, and appears to have handled the October payments without issue.  However, please do contact me on e-mail or Discord if you have paid for October but not yet received game access.

Additional info on the multicurrency change can be found on Patreon’s website.

Finally, I want to thank everyone who has continued to support the project during the engine port over despite there not being any new content while I work on rewrites.  The rewrite is a long and arduous process, but it means the game will be able to have a longer term future outside of Flash’s death, so it’s important to get it done.  Your continued support allows that to happen, so as always, thank you for both your financial support as well as the encouraging comments on the blog and on Discord. <3