The newly released r32 build adds the intro section of Chapter 7 (the section that occurs before you get to the aquarium).

You finally make contact with the shadowy Baosheng Group and discover Krista is becoming a cowgirl.  Will you return her to human, send her to the farm, or keep her for yourself?  These three different endings will greatly affect the future of VCiV.

This section clocks in at around 6,684 words, which means that just the intro for chapter 7 is already slightly more words than all of chapter 3.  There’s not much puzzle solving or enemy fighting in this intro though, so it should be a quick play.  Try all the endings! 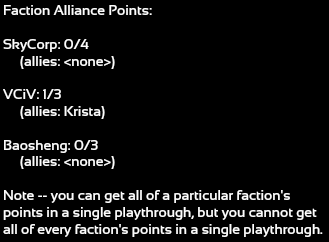 Faction Points are now properly tracked and saved.  There is a UI scene (currently in settings, but will eventually be moved somewhere more appropriate) where you can check on your current faction points and allies.

This system helps keep track of the various decisions you’ve made throughout the game and how you’ve aligned yourself with the three factions.